Depressing News on US Wealth Gap This graph from the Pew Research Center shows the depressing wealth gap that exists between Whites and minorities in this country.  Personally speaking, I am an embodiment of this.  While my income as a single male with no children is OK, I have no great wealth.  I do not own any homes or cars.  I have no stocks or any significant savings.  I live paycheck to paycheck and even then there are some bills that don't get paid.  I hope to change this within the next 10 years or so but sadly many other minorities are lacking the opportunities to do so.  Read the entire Pew Research Center study here.
The fabulous Melissa Harris-Perry, professor of Political Science at Tulane University and columnist for The Nation, guest hosted the Rachel Maddow show last night and had a wonderful segment on this topic.

Visit msnbc.com for breaking news, world news, and news about the economy
Posted by vanfanusa at 5:51 AM No comments:

Serena Williams won her first round match in Stanford 6-0, 6-0.  A giant double bagel.  She was on fiya!  Check her out looking lovely in green:

Serena must read Tennis.com because they just posted a column on double bagels earlier in the day.  She must have wanted to add her own to the list!
Posted by vanfanusa at 4:45 AM No comments:

Ummm, what's wrong with this picture?

Posted by vanfanusa at 3:32 AM No comments:

I was reading a great article on Salon.com by Alex Pareene along the same lines of the article I linked to yesterday about Republicans turning to conservative bloggers and talk show hosts for legislative advice.  In that article, the writer referenced a NY Times column that makes a weird suggestion for how to elect our next President.  Pareene gives us a look into the future if this weird idea were to come to pass that had me dying with laughter:

Faced with a legislative system with too many veto points and a polarized national electorate regularly splitting their votes between the right-wing party and the incoherent party of "everyone else," Friedman suggests that we elect a third-party president via Web poll. Yes!!! THAT WILL SOLVE EVERYTHING. Someone with no power base in either party, selected by Reddit users. Can't you just imagine how President Maru the Box Cat would be able to cut through this "partisanship" and get things done with "leadership" from the "radical center"? This Web poll third party will be the Amazon.com of politics, in that it will kill the Borders of politics. (I think the Borders of politics, in this example, is the labor movement. Sorry!)

For the uninitiated, this is Maru the Cat: 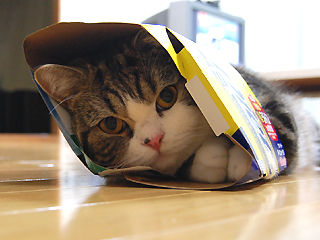 Learn more about him here.  He could be our next President!
Posted by vanfanusa at 3:23 AM No comments:

4 Minutes of Diva With A Little Insanity Mixed In!

Mariah Carey was on HSN Sunday night selling some crap and was apparently a total diva and utterly insane all at the same time.  Below, is 4 minutes of the craziness as compiled by Gawker.

Posted by vanfanusa at 7:51 PM No comments:

Erick Erickson Will Look Down and Whisper ‘No.’

The above link is to an blog post by Matt Yglesias on ThinkProgress.org and it encapsulates what I think is one of the major problems in Republican politics. Why are congressional Republicans seeking advice from incoherent conservative blogger Erick Erickson? Aren't they supposed to be intelligent, free-thinkers who were elected by their constituents to serve their needs and interests not that of the conservative blogosphere? Why are they so beholden to the likes of Grover Norquist and his ilk? Why are they constantly boxing themselves into legislative corners by signing useless right-wing pledges and making grand statements in order to toe the line of some austere conservative talking point? I have plenty of faults with the Democratic party but nothing they do is even comparable the Republicans basically giving away their power to bloggers, think tankers, pollsters, and corporate interests.
Posted by vanfanusa at 6:58 PM No comments:

To prepare for Serena's return to the US hardcourts this summer, I've been watching some her matches at World TeamTennis, the 3-week team exhibition league co-founded by living legend Billie Jean King.  Check out some of the action of a set she played against former rival Martina Hingis particularly the first point in which she has to hurdle over the net!  Oh Serena, sooo full of drama!  Unfortunately, she lost this particular set but that's not too unexpected as Serena rarely plays at 100% in these types exhibitions.

Posted by vanfanusa at 6:05 PM No comments:

vanfanusa
Philadelphia, Pennsylvania
Well...what's is there to say. Let's see. I am a fairly simple and friendly 33 year old black, gay dude. Currrently working in the Insurance industry with aspirations of becoming a vocal actor doing commercials, recordings, radio, and/or live announcing. My personality is somewhat shy, quiet, and reserved until I find the right person(s)to bring out my wild side!